Is the term “skin effect” often arising in the audiophile world only a “voodoo fallacy”, or does this phenomenon, as described by J. C. Maxwell in 1892, really influence music reproduction?

Nikola Tesla is often mentioned in relation with skin effect. At his exhibitions, he would let electric current run through his body, while lighting up rare gas-filled tubes with bare hands. Using Tesla coil, he would demonstrate ways of electric current transmission to his audience, which were unheard of at that time. How come that the electric current did not kill him? It was not thanks to the skin effect, as is often erroneously assumed. Aside from what Tesla believed, the idea of a Tesla coil current running solely on the surface (or skin) of a human body, is just another misconception. Surface is relevant, though.

The skin effect really exists and it is a physical process, in which the electric current is pushed outwards of a conductor, towards its surface. However, it mainly applies to metal conductors. And how did Tesla do it? The human nervous system does not react to electric current from a certain frequency up. Hence, Tesla did not have to worry about his heart (he did have to about possible temporary tissue damage in the body, however). Of course, the human body is a conductor as well. Still, the body is not a piece of metal. For the skin effect to actually make any difference here, a current of even higher frequencies would be needed. Such currents have found their use in medicine (and the skin effect is taken into consideration in electrosurgery, for example). 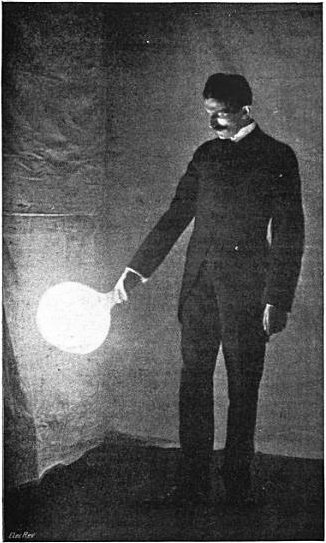 How Does the Skin Effect Work?

The electric alternating current (I), running through a conductor, encloses field lines of magnetic flux (H) around itself. These lines create vortexes (Iw). The vortexes run in reverse to the initial electric current, hence a subtraction occurs. On the contrary, the directions of the current and the vortexes are the same closer to the surface, so they add up.

The skin effect increases with:

Where Does the Skin Effect Apply in Audio Technology?

Where strong alternating currents run. From the source of the current for an amplifier, through the amplifying component of a transistor or tube, all the way to the speaker driver. The skin effect applies mostly to speaker cables because of their length. Although connecting cables are usually the longest cables in the audio chain, having the greatest influence, cables are also present inside speakers. When it comes to their length (that is the length between the connection terminal and the speaker driver) and quality, even high end speaker manufacturers often don’t really care.

According to a study by Malcolm Raven (2015), in metal conductors, the skin effect applies—to a certain extent, although definitely—not only to high frequency currents, but low frequency as well. The author compares theoretical premises with actual impedance measurements of a copper, aluminum and brass wires and a copper wire rope, 0.5 and 4 mm in diameter, at frequencies spanning from 100 Hz to 1 MHz. The result states that the measurement results are comparable with the premises and that the skin effect applies to audible frequencies up to 20 kHz.

Is the Influence of the Skin Effect Essential with Speaker Cables?

As mentioned, an influence exists, it is definitely not essential, though. Looking at the purely electrical connections in the audio chain (amplifier—cable—speaker driver), each of the parts has its parasitic—or unwanted—properties. The most basic of these—the cable—has them as well. A diligent reader (or an electrotechnician) knows that every cable’s main parasitic property is electrical resistance, which is also dependent on temperature. And resistance is not alone. A speaker cable consists of two insulated conductors. The current runs to the speaker driver through one of them, and in the opposite direction through the other. Therefore, they are affected by mutual inductance, cutting it close right after resistance. Mutual capacitance also applies between the two conductors. A possible alternative electrical scheme of the cable could be two resistors (impedances), which also have an inductive and capacitive linkage. The influence of all these properties substantially exceeds that of a skin effect.

Taking into consideration all the mentioned (i.e. important) parasitic properties, with high sensitivity speakers, the differences in manufacturing technologies of speaker cables are audible. But even when taking all these properties into account, the cable is still just one part of the entire audio chain, in which the most important role is played by the often overlooked acoustics of the listening space. And that is a topic for another time.